Throughout my time working on games, I try my best to iron out speedbumps in the toolset. The path to creativity shouldn’t be riddled with technical hurtles. Unreal’s editor hasn’t changed much over the past decade. The upcoming UDK 4 will drastically change that. This is about the here-and-now, however…

Turok was the first project I used Unreal to build levels with. After spending time with several game editors (Riot, Lithtech, and other proprietary ones), you get a sense for what’s good and what’s bad. UnrealEd still features odd choices from when it was created years ago. Not enough time was spent integrating new features as they were added.

The following images come from a much larger document that details changes in tools, interface, shortcuts, and features.

When constantly editing brushes, surfaces, or terrain, windows pop in and out of view. If you have two monitors, it’s not bad. If you only have one… well, good luck finding how to see the viewport and toolset at the same time.

This first iteration integrated those floating panels into a tabbed left column. These could of course be popped off if you wanted them always visible. If you’re familiar with Epic’s tools, most of these additions should be self-explanatory. I’ll go into greater detail for these panels in Version 2 (see below).

Several button were updated to something more standard and recognizable. Buttons were moved around. More frequent ones being grouped with like-types or moved closer to the upper left side, where more common activities occur. 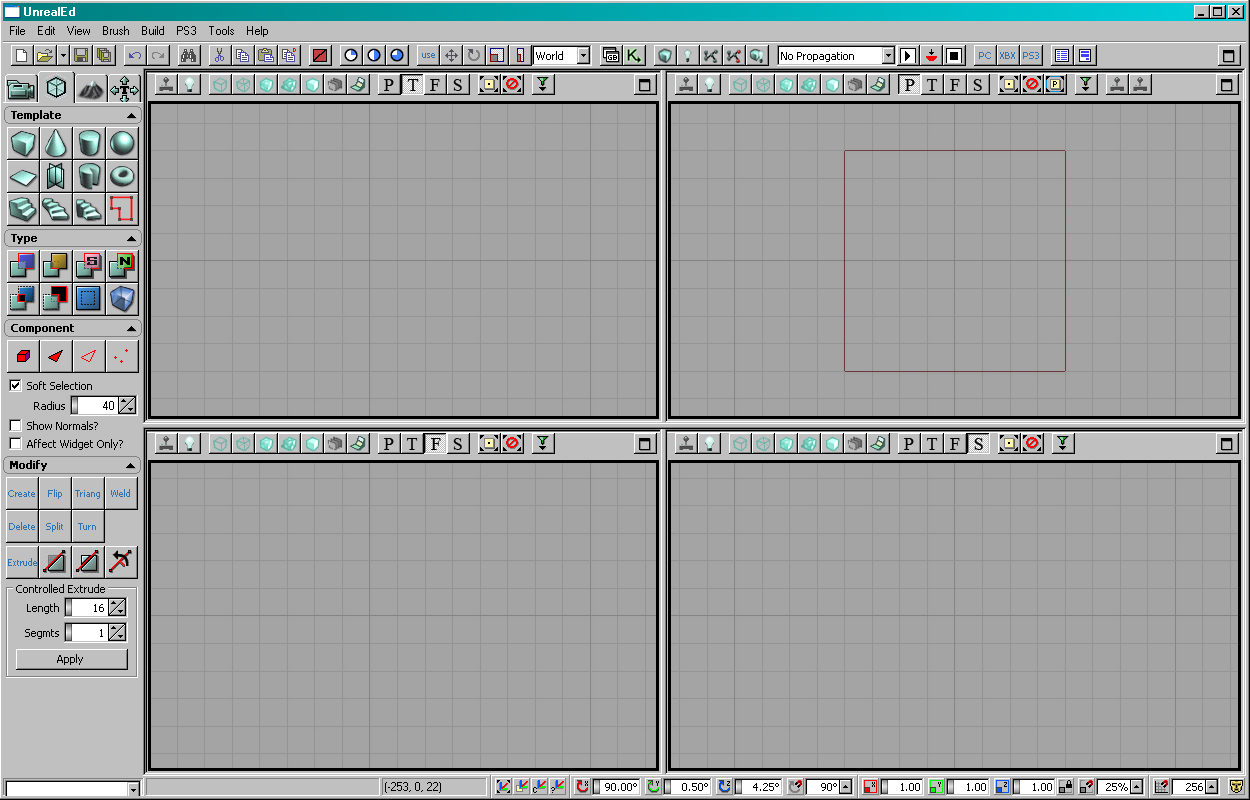 The last feature added was a Transformer Bar on the bottom. Precise object placement can be a minute-to-minute need throughout level development and they’re currently buried in the Property window. By exposing these to the main interface, users can quickly review and make changes to the hundreds (if not thousands) of objects quickly.

For the next iteration, I moved the Transformer Bar off the bottom edge to its own column for two reasons:

Now on the right side, the Transformer features a variety of frequently used tools. The first one being the Locator group. When your level has 50,000 objects, it’s hard to find where your object is in the viewport. The Locator is a moveable crosshair that can also act as an origin or pivot point. The group has the following options:

The Toggle group has some familiar options and a couple new ones:

It’s important to note if you hold down any of the X-Y-Z buttons, your cursor changes to a Target Crosshair. Dragging this over an unselected object in the viewport will transfer the original value to the new object. This becomes a super fast way to match position, rotation, or scale to several different objects.

The Terrain panel was originally a huge floating window. It’s now been added as a column tab for frequent use. You can control the size of your terrain swatch, the shape of the brush (with preset types), and min-max limits for its elevation.

Texture manipulation is the bread-n-butter to creating a visually coherent world with a limit amount of art. The Texture Tab features all of the original Surface Properties options as well as some more. You can now quickly preview new materials without needing to sort through the larger Resource Browser window.

Like the quick copying X-Y-Z buttons mentioned above, UV values can be transferred to other surfaces in a similar manner (drag & drop). Copying and Pasting complete UVs can also be done via this panel.

While the ideas above were not completed, I did create the icons used in those images. Replacing icons in your own copy of UnrealEd is pretty easy. I recently updated them for use with the 2K’s Bioshock Infinite editor.

All Unreal Editors feature the same core actions. If you want to use these for your own editor, download and unzip the file below.

Unreal’s Scene Manager is the closest thing they have to an Outliner (a way to manage all objects in the level from one list). I also went through a couple revisions for improving the Scene Manager’s functionality.

Several ideas were added to make this the one-stop-shop for level object management.

By having the Transformer Bar on the right side of your 1st monitor and the Scene Manager in the left side of your 2nd monitor, duplicate actions can be removed. These changes become:

I was going to post all suggestions and changes for Unreal’s Editor, but with the advent of UDK 4 and a totally new interface, toolset, and workflow, most of those smaller details become moot. I’ve test driven UDK 4’s new editor and it’s leaps and bounds better than their current version.